"Still there must be a place for us little burnt-out sunbeams." 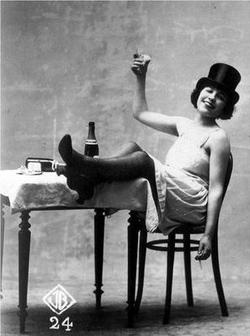 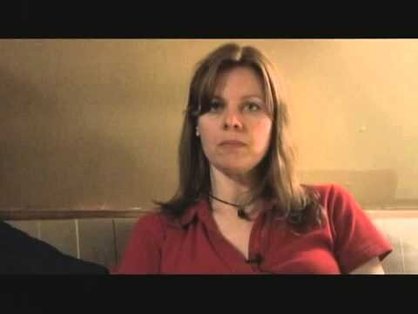 Bunny Brown appears in I, CURMUDGEON by Alan Zweig
May 2014 marks the ten year anniversary
of the release of I, CURMUDGEON
by acclaimed Canadian documentary filmmaker Alan Zweig.


The movie premiered at 2004's Hot Docs festival in Toronto, Canada. It features interviews with an oddball assortment of players, including Fran Lebowitz, Harvey Pekar, Scott Thompson and Andy Rooney, among others. Bunny Brown laments life and has a few laughs as part of the curmudgeonly ensemble. 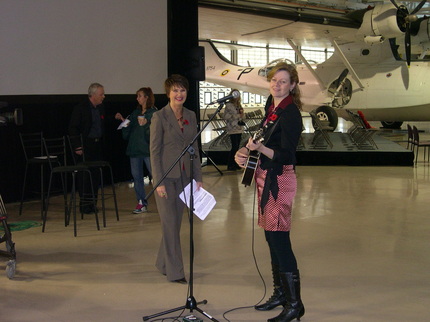 Playing a song live to TV in a gigantic hangar surrounded by Lancasters, Avros, Yales and DeHavillands, veterans, current soldiers, cadets and all those wishing to observe Remembrance Day, was a singular experience indeed. The second most attended ceremony in Canada, more than 3000 people were on hand at the Canadian Warplane Heritage Museum in Mount Hope on November 11, 2013, to mark the occasion. 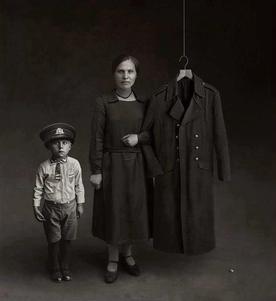 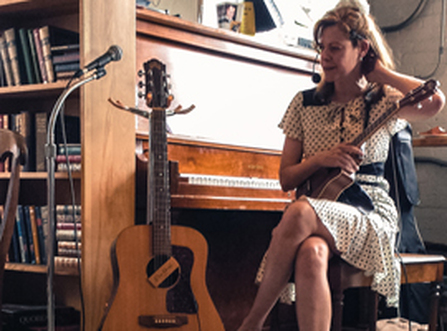 Photo of Bunny Brown by Meagan Thibeault
Strapping on the uke and kicking off the series...
Between August 2013 and February 2014, Bunny created, hosted and performed at
a monthly Sunday afternoon cafe series where she played with many artists including
Mia Sheard, Jack Breakfast, Selina Martin, The Pairs, The League Of Notions,
Gary Earl Rawlings and Michael D'Amico.

Wednesday, June 12th, 2013, come out to Smiling Buddha Bar (961 College St. -- just west of Dovercourt Rd. -- in Toronto) and hear Bunny play a sweet suite of original songs on the ukulele. Joining her for the evening's line-up will be Young Readers direct from Oklahoma. Bunny's set will kick things off, so be sure to get there early! Show begins at 9 pm. 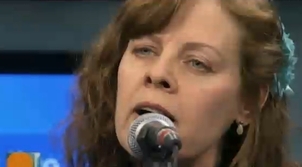 Watch as Bunny sings out CH TV's broadcast week on a rainy spring Friday, April 12, '13 with a song from her new CD, BUNNY BROWN IN FLAMES.

But which one? Glenellen Drive-By? Or Dream Date? We invited folks to check out a preview of the two tracks through the player on the "HOME" page, then weigh in on which tune they thought she should perform with a tweet, or a comment to her facebook page. Check out what one won! 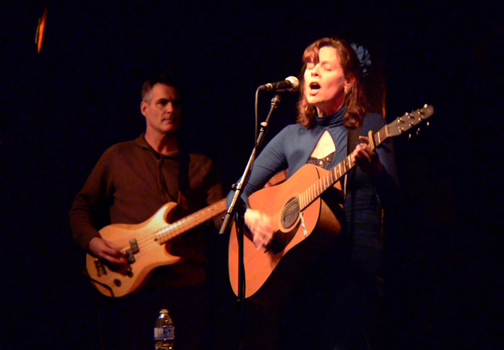 Bunny Brown at The Rivoli with Michael D'Amico accompanying on bass. Still by James Hind

Bunny Brown at The Rivoli 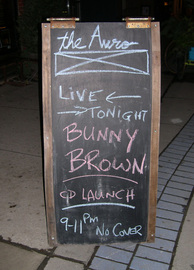 Photo by James Hind
The house was full, the energy was high, and Bunny was delighted to be your pilot at
The Avro the evening of December 4th, celebrating with family, friends and fans (while knocking off a bit of rust in the process after being holed up in the studio for so long!)

The cozy club was a perfect setting in which to play the more stark and essential live piano and guitar treatments of songs from BUNNY BROWN IN FLAMES. Michael D'Amico provided some sweet accompaniment on bass and mandolin.  And a highlight came at the top of Bunny's performance of SITTING DUCK when, at her request, the attentive, obliging audience let loose with an impressive array of impromptu duck calls.

Thanks to everyone who came out for making the night a very happy and memorable one.

Bunny Brown At The Avro 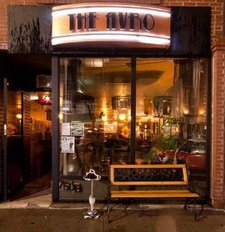 On December 4, 2012, come out to Toronto's Riverside/Leslieville district and join Bunny as she previews some of the songs from BUNNY BROWN IN FLAMES at The Avro, 750 Queen Street East (on the north side of Queen, one block east of Broadview,  almost across from The Opera House), between 9 and 11 pm.

Bunny is over the moon that her second album is finally wrapped and ready for release, so let's clink some glasses, spin some tunes and seal the deal with a little intimate acoustic live performance. See you there!