"Can't you see we're meant to be like the ghosts in the radio?" 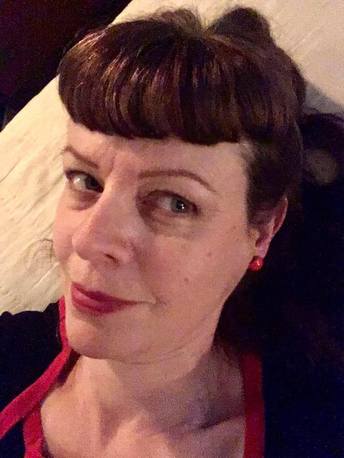 Born and raised in St. Catharines, Canada, Bunny warmed up for life ahead by singing her lungs out on the swing set in the backyard of her family home. As a teenager, Bunny left for Ottawa to play keyboards in a band around the capital city and Montreal area before returning to Niagara, where she met Michael D'Amico and became one half of their duo, Happy As Hell. Among fans were Bootsy Collins, Chrissie Hynde and the late great Sun Ra, who chose ​HAH as a best unsigned band for Musician Magazine in the USA.
​
Settling in Toronto, Bunny made her solo debut in 2004 with Tomorrow The World, a collection of songs that illustrate her surrealist-noir style -- combining a richness of melodies and a depth of lyrics with a sumptuous voice -- that has been described as "disconcerting dreampop".

Her follow-up release, Bunny Brown In Flames, is a selection of personal, passionate and playful songs featuring inspired performances by guest musicians including Jason Staczek, Seattle area based composer for Guy Maddin films Keyhole, My Winnipeg, Brand Upon The Brain! and more, as well as players Al Cross, Victor Bateman, Rachel Deck, Ben Bowen, and Michael D'Amico, who also co-produced the album with Bunny, along with Jason Staczek on one of the tracks, A Quiet Demon.
She has collaborated with many other artists along the way, and appears in Alan Zweig's critically acclaimed feature documentary film I, Curmudgeon. Bunny occasionally gives interviews and performances on TV and radio, as well as playing the odd live show around southern Ontario, where she enjoys clobbering a bunch of unsuspecting tunes with a ukulele while simultaneously murdering a mint julep.