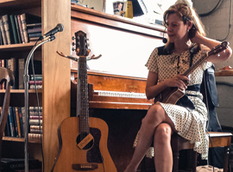 Bunny Brown Presents  an ongoing series of quirky elegant fun. Bunny hosts and performs, and welcomes new, uniquely talented guests to join her for each installment. Come to Merchants Cafe on the last Sunday afternoon of each month and check out the perfect pairing of delightfully singular original music and delicious single origin coffee. Tucked just behind Queen St E in an historic factory warehouse that looks out towards Toronto's skyline, Merchants Of Green Coffee is a hidden gem of Riverside. And with her strong 1920s to 1940s influences, Bunny's ukulele, guitar and piano songs feel right at home amid its rustic charm. 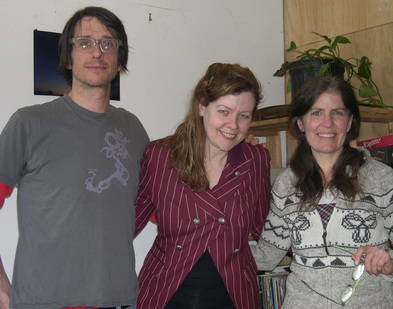 By the time noon rolled around and the show was set to start, we were all a bit dozy on account of getting up bright and early to watch Canada's men's hockey team play for the gold medal in a seven AM EST game against Sweden in the 2014 Winter Olympics. Ah, but Merchants Cafe came to the rescue with a much needed and much enjoyed caffeine injection to keep us going.


Mia Sheard was joined by Kevin Lacroix on electric guitar, and together they made mellifluous magic. Mia's beautifully bittersweet songs resonated soulfully throughout the old factory. Bunny moved between uke and guitar, then headed to the piano for closing numbers. The audience was considerable and attentive, and all of this made the afternoon feel just about as golden as the morning had turned out to be. 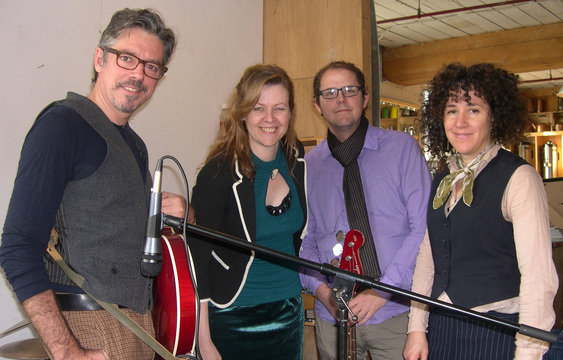 Photos of Bunny Brown and The Pairs by James Hind
Skewering a certain "crack-smoking mayor" with songs that feature lines like "there's nothing left to do but get stoned" and "all I know is something's got to go, it's either the elephant or me" is undeniably satisfying. And as it turns out, both Bunny Brown and The Pairs have an inexplicable abundance of apropos odes for odious oafs. (The chief magistrate wasn't in attendance of course, but it was gratifying to imagine his ears burning with every dedication.)

Toronto's crisp autumn swiftly gave way to frosty winter this weekend, and although it may have been minus eight degrees Celsius with a light dusting of snow on the ground outside on this day, there was plenty of warmth to be had inside. Cheers to Andrew Frontini, Lisa Logan and Peter St. Laurent for a lively and luscious Pairs set.

October 27, '13, with Selina Martin
A divinely odd October gig, made the more peculiar thanks to some of the louder attendees' bold assertions (like the guys who claimed to have made dinner for Rush drummer and lyricist Neil Peart the night before...)

This one has to be dedicated to Lou Reed. Word came during Selina Martin's set that he had passed away, so she respectfully summoned an impromptu verse and chorus of Sweet Jane. And, as it happens, Selina had just done a touching live rendition of a song from her latest album, DISASTER FANTASIES, called News Of Her Death, about someone dear who had succumbed to illness and the ensuing grief that leaves all cold "like a blanket of snow."

Odd, the way music, by invoking the past in the present, divines to us from the future. 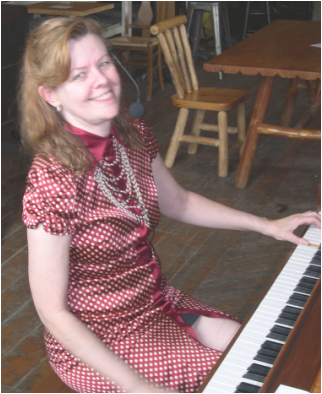 Photos of Bunny and Jack by James Hind
September 29, '13, with Jack Breakfast

Things we learned from Sunday's show at Merchants Cafe with Bunny Brown and Jack Breakfast: Wasps aren't bees, nobody cares, and it's all weird.


Jack Breakfast was wonderful to watch, playing a set solely on piano that was beautifully affecting.


Bunny alternated between uke, piano and the six string. Michael D'Amico, birthday boy that day, sat in on bass for a handful of Bunny's guitar tunes.


Naturally everyone was buzzed on delectable Merchants coffee. They were also buzzed by the odd yellow jacket, obviously in a September stupor, trying confusedly to figure out how to exit the cafe, nice as the joint is.


Jack gave an informative and hilarious impromptu speech regarding the bugs: something about how their lack of a pollination role makes them rather expendable so you can just go ahead and swat them... But because it's so hard to tell them apart from the imperiled honey bees, you can't just go ahead and swat them. Jack's insights had a marvelously unifying effect, because after that insects and humans alike were stupendously bee-fuddled. 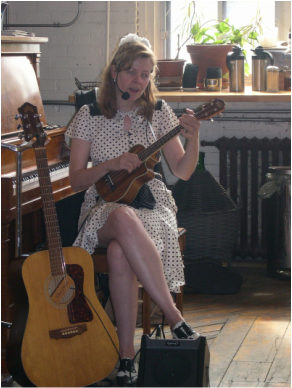 Photo by James Hind
The very first date in the series...
A perfect way to spend a hot and hazy, lazy summer day. So much fun.

The premier show also marked the official debut of Bunny's new bundle of joy... And what a beauteeeful baby it is! A brand spankin' uke, affectionately known as "Babe Ruth" (named in homage to her Aunt Ruth, the sister of Bunny's father and longest-lived family elder, who died earlier this year at the age of ninety-five. An original flapper and all-around colourful character indeed was Ruth!)

Gary Earl Rawlings treated one and all to a set of his sweet and sassy songs. And with a voice evoking vintage vestiges of the likes of Jack Jones and Johnnie Ray, he had everybody smiling. 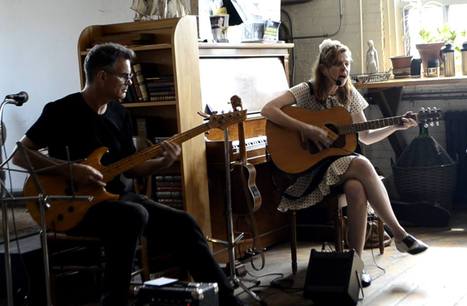 Photos of Gary, Michael and Bunny by Jennifer Grant