"See the glassed-in porch and blue Impala? You're at 31 Glenellen Drive." 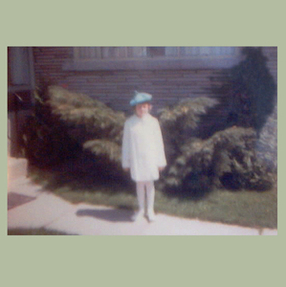 Photo by Ken and Dorothy Brown
Thinking back, I remember my awkward first attempts as a songwriter and musician, which were when I was about six or seven. I know because we moved from the house on Glenellen Drive in St. Catharines when I was nine, and I had three or four primitive tunes going by then. One was a co-write with a kid from around the corner. We put together a girl group and whoever had an instrument was in. Since I owned a toy piano (a little white plastic baby grand, no less) I was the keyboard player. Nobody could actually play, but it didn't stop us giving concerts on the front lawn. We were The Bluejays but then I think it was decided we needed a more psychedelic name and changed it to The Eyeballs. My brother was twelve years older and had a band too. His was for real though, covering classic rock like The Beatles and The Guess Who. Groupies swooned and fawned when they rehearsed in our basement. My other brother had a thing for glam: Bowie, Alice Cooper and Kiss. Mum dug Tom Jones and Engelbert Humperdinck while for Dad it was Spike Jones and George Formby. I loved it all.

Later on, at eighteen or so, I battered a Korg Polysix about in an Ottawa-based band for a while had great fun just being a sideman. Then, back in Niagara, I became a wing-woman in Happy As Hell, my duo with Michael D'Amico (with whom I'm blessed to still be working so many years later), where I was writing and singing songs that had a lot of whimsy and humour. Flying solo, the music got darker. I taught myself to play guitar. Who knew it would prove to make a very good floatation device for many a magnificent fiery plane crash into the ocean? I moved to Toronto, released Tomorrow The World in 2004, and since then I've hit some rather sweet spots along the way.  I've especially enjoyed the shows, sessions and projects I've been involved in with some truly tremendous artists. And what a delightful if dubious distinction to have been included in filmmaker and friend Alan Zweig's feature doc, I, Curmudgeon, where I happily got to join in a cavalcade of crustiness!

There have been tough spots too. The loss of loved ones, the challenge of health diagnoses, the search for meaning, the struggle for means, and the earnest effort to stay hopeful and productive amid it all. Well, this is the incendiary stuff that makes one keenly aware of the passage of time. Lifetime. That in mind, I decided to call my second album Bunny Brown In Flames. Its release, at 2012's close, has left me feeling thrilled and grateful.

Which brings me to this moment. Wherever you are at present, our world is in pretty ominous shape. We're left to cope. I guess I am an extremist who longs for a (re)union of the opposites, trying to balance all the contradictions and let thorny bliss find a way. A midway. At the carnival. Maybe win myself a little stuffed monkey on a bamboo cane. Beauty is a discipline. Devotion is lovemaking. Joy will out. Be still, my bursting heart.