"Should I fight or should I run?"

The first thing you see when you enter Bunny Brown’s MySpace page is a simple but very telling and eerily prescient quote: “Risk your life doing something beautiful.”  The line is as much a clever hook for Bunny Brown as it is a statement of intent for the  music she makes.

Since deserting the Ottawa glam – punk scene for a more insomnia–inducing back drop in Toronto, the St. Catharines–born song writer has been charting her own course with a sound that could best be described as disconcerting dream–pop; the sound that could accompany those dreams that, upon awakening, the dreamer runs to the mirror to make sure their reflection is still there and with no additional scarring. “I think a lot of that [the overall sound of Brown’s music] comes from listening to a lot of punk growing up,” explains the singer of her often chilly and eerie content and delivery. “I loved the fact that no topic was off limits and that you could write about anything. Although I love pop as a form, I’ve always dragged the idea along with me that whatever’s in your mind and heart, you can write about and even if you work in a pop form, it doesn’t limit what you’re going to talk about. I think the things that come out of me do so because they’re just on my mind.

“From a musical standpoint, my influences came a lot from what was around me,” Brown continues. “My brothers were older than me and played a lot of Beatles and David Bowie and things like that – and they really impressed pop structures on me. I also like Tom Waits a lot. I remember somebody giving me Swordfishtrombones shortly after it came out and it’s one of those CDs that just changes your life and the way that you look at music and its possibilities.  It gets deconstructed and it opens this door of perception…
“I think an album like that proves that you can mess with these traditional ideas but it can still be brilliant in terms of being a vehicle to really service metaphors for emotions. I’ve always liked that about music; the idea that you can express things that you don’t normally have many outlets for without feeling awkward. In music, they take on a life of their own and become more something that anybody can relate to. You can take your personal stories and enter a dimension that’s more universal.”

While 2004’s Tomorrow The World saw Brown and collaborator Michael D’Amico diving headfirst into every direction that struck their fancy and trying on every hat available to see what fit, according to the singer a desire to simplify things has become the standard as they’ve been steadily working on the follow–up to the disc. “I guess it’s a little more mature, but I like to think of it as a little simpler,” explains Brown of the duo’s approach to following up Tomorrow The World. “The first record is actually a lot different from what we’re doing now. It was very experimental in its way. I took about 3 years to do it and I didn’t want to limit myself in any way in terms of production or anything like that so it takes a lot of turns throughout the course of the CD and ends up being a really varied listen. We took a lot of different approaches with the last album, but this time we’re really sticking to an essential format of just making it clean with a less-is-more approach. The one track, “Free Toronto” is the exception, but a lot of the rest of it is really stripped down. We’ve been going closer to letting each song hold its own this time out." 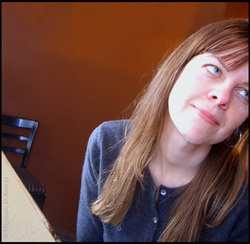 From those songs already completed for the next record, the early standout is certainly “Achilles At My Heels”. Amid  crystalline  guitars  and  sparse  keys,  Brown sings tentatively about the hesitation and worry that tends to surround the human experience as people attempt to move forward with their lives.

The song is beautiful and very disarming, a truly unnerving listen that is impossible to turn away from. It’s cathartic and, while Brown does concede that her music and lyrics are auto-biographical, she realizes that, after it has left her head and is put on disc, it becomes the property of the listener.

“I try to document life as I go along and songwriting has always been a way for me to do that,” says Brown as she attempts to explain her compulsion and penchant for songwriting and the themes that she explores in her music. “It’s comforting and I think that’s what I really identified with when I was growing up. As lost as I ever felt at times, I could always find artful things that I could relate to that tended to mirror my confusion and I found I didn’t feel quite so alone. That’s always kind of stuck with me.”

But, by the same token, Brown quickly points out that the trick is to not get overly involved in the process for fear of getting too self–absorbed. “I always raise an eyebrow when I think of music as a kind of therapy because there’s only so much of that that you can do before it becomes really self–indulgent so I’m always trying to look for that middle ground where you have an experience but it’s a human experience; it’s not just you and your personal muddle that you can’t seem to transcend.”

As well, Brown says that while the record is still in the works, she and D’Amico – now joined by Vince Rice on drums and multi–instrumentalist Dave Feschuk of the Toronto–based Bucolics (for a live gig here in St. Catharines), – have already been performing the finished material live while continuing to simultaneously finish the rest of the album. “We’re recording it as we go along and we’ve still got a few more songs to do and then we’ll decide which ones make the cut,” says Brown of the progress of the record. “We’re actually not too sure what we’ve got – we’ve got a whole lot of stuff recorded already – and we’ll see which songs work off of each other the best. We’re not sure which label it’ll come out on yet, but we’re trying to suss that out too. We put the last one out on our own little label, but right now we’re seeing what other opportunities are available. Who knows? Maybe another indie label will have more to offer us than we can do on our own.”
Bill Adams [photos by Michael D'Amico]